Picture the climax sequence of the Academy Award-winning film Argo. Except, unlike Ben Affleck’s Tony Mendez in the film, luck runs out for the protagonist in this story — Michael Coyle, 33, a native of Missouri, USA.

As he looked up at the cabin crew relaying safety instructions in the aircraft he was seated in, barely hours after Prime Minister Narendra Modi went on air to declare that India was entering a 21-day lockdown in March, Coyle breathed a sigh of relief.

An architect working for the US government, he had come to India on an architectural exploration trip of the many cultural sites, only to end up being caught in the crossfire between an unforgiving virus and a Government on the backfoot. Yet, here he was, seated comfortably inside, perhaps, the last flight out of the country, and he made the mistake of believing his luck would last. The plane developed a snag; five hours of uncertainty later, the airline crew grounded the flight and the American national found himself out of options as he stood outside Delhi’s Indira Gandhi International Airport.

The next morning, on March 25, Indian airports slammed shut as the country entered into lockdown.

Coyle’s is just one of the stories of foreign nationals stranded in India, although he still found a silver lining. A travel agent helped him secure accommodation as long as he continued to front the cash and provided proof that he had not contracted COVID-19.

Safe at a distance

Coyle now awaits the day he can finally fly home. However, many others cannot consider themselves as lucky. Last week, police authorities in Dehradun, Uttarakhand, rescued six foreign nationals — all tourists from USA, France, Ukraine, Turkey and Nepal — from a cave in Rishikesh. The stranded tourists had retreated to the cave after they ran short of money and the private lodges they had been staying in booted them out.

“There were many stuck all over India. Some had no money, and could not even afford to pay for food. Others were looking for some cheap accommodation to help them get past the lockdown. I picked up two men, a 60-year-old and a 28-year-old, who were sleeping inside a park. They are from Spain. Their hostel had kicked them out after lockdown,” says Nikhil Gupta, operations head at DatStop Hostel, a six-month-old entity in Vasant Kunj, Delhi.

DatStop was one of the few lodging properties in the capital that kept its doors open in the initial days after lockdown (it continues to do so).

“We have around 23 people currently in our property. Around five or six of them are Indians, the rest are foreigners. There have been people from Germany, Mexico, USA, France, Argentina, the Philippines, Spain and the UK among others. Some of the embassies have also been arranging evacuation flights, so we have had at least 20 people fly back home. Yet there are more calls everyday,” adds Nikhil.

Low-cost accommodation and guests staying in them invariably became the collateral damage in the crisis post-lockdown. 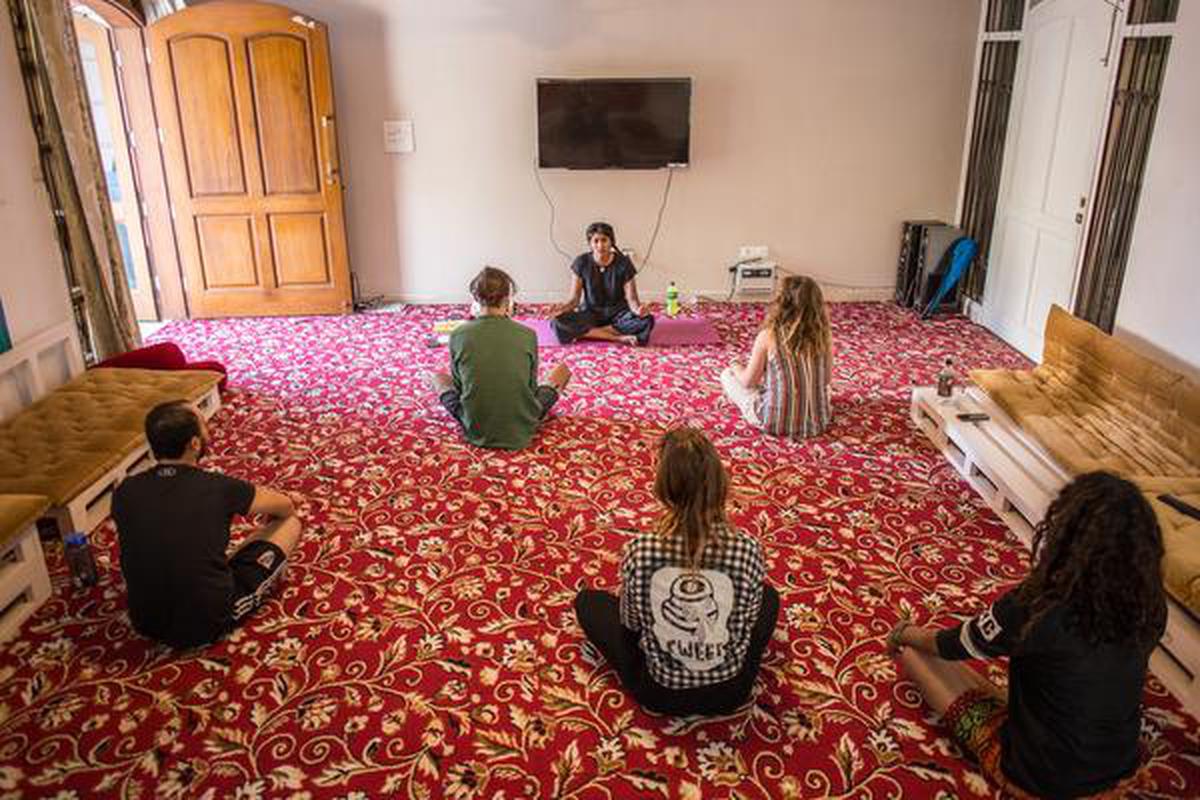 Budget hotel chain OYO, which came under fire after reports of guests being thrown out of properties, put out a statement reaffirming their commitment to provide shelter to stranded tourists. “OYO is currently in touch with over 15 diplomatic missions in India and has already helped stranded foreign tourists from USA, Brazil, Belgium, Portugal, Australia, Chile, Argentina, Thailand and Indonesia,” the company said in an email response to The Hindu’s queries attributed to an OYO spokesperson, adding that the firm “continues to identify hotels than can be of service in this hour of need”.

In the case of mid-market hotels, guests who were already being accommodated have been allowed to stay on, although this is not the case even in a few luxury hotels, where guests had been asked to leave prior to lockdown with hotels choosing to manage properties with a skeletal staff.

“Any guest who was staying with us prior to the lockdown has been given concessional rates to stay in the same hotel or a similar/higher category of one of our hotels in the vicinity. This is keeping in mind those hotels wherein operations have not been temporarily suspended as per Government regulations,” says Rattan Keswani, deputy managing director, Lemon Tree Hotels, a mid-market player in the Indian hospitality sector. 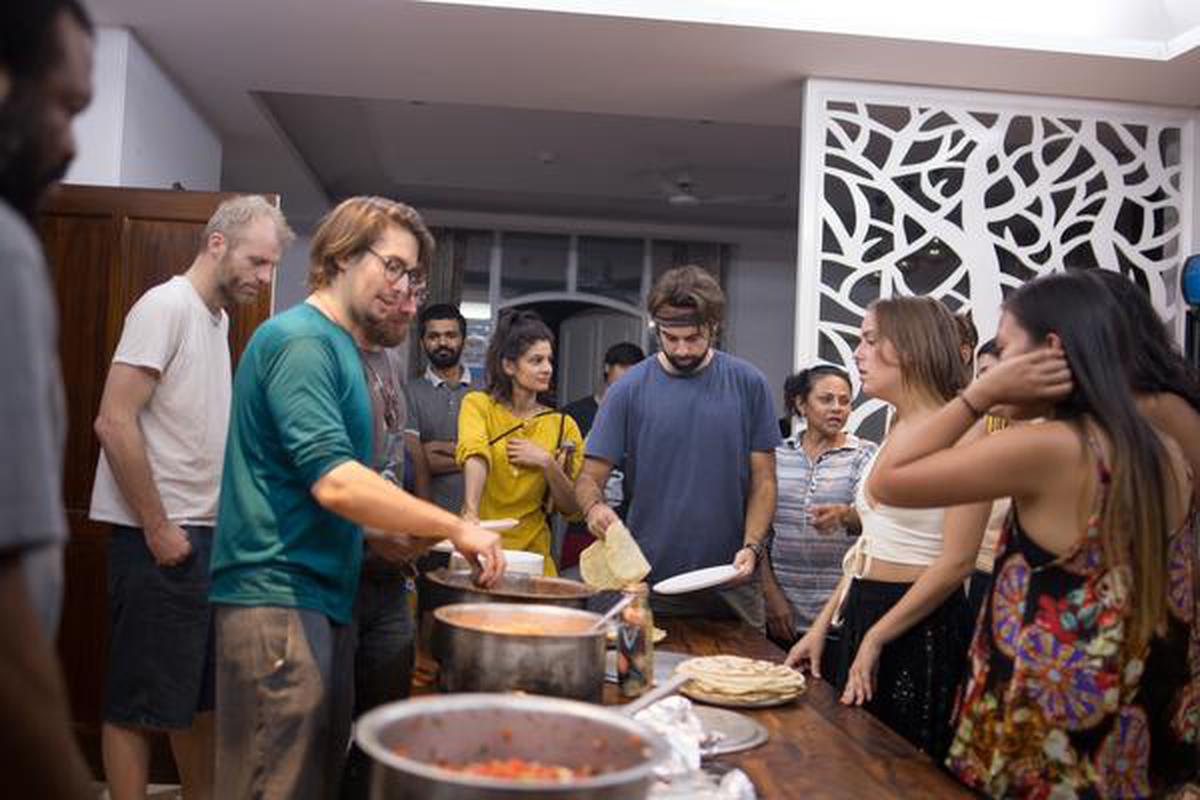 Guests at the DatStop hostel share their dinner during lockdown


Properties like the Taj Group and Club Mahindra Holidays, on the other hand, did their bit by offering properties to be used as quarantine facilities and accommodate frontline workers. Notably, the iconic Taj Mahal Palace in Mumbai took in doctors and hospital staff working in places like Bandra, Kalyan and Marol as the frontline workers were facing restriction and opposition in the residential colonies they lived in. This was until six members of the hotel staff tested positive for the virus a couple of weeks ago.

While established hotel chains can afford to show generosity in this hour of crisis without unreasonable fear of crackdown by local authorities, it is the small-scale players who have taken up the bulk of the task of accommodating stranded tourists, even if it means facing resistance in the society they operate in.

“We have been appreciated by embassies but neighbours continue to report the presence of foreign nationals from time-to-time, especially when a new member joins us, and the police have to drop in to check if everything is in order. We understand the neighbours are worried, so we ensure social distancing inside the property and only admit people with medical certificates and a letter stating they are a guest of the embassy,” says Nikhil. He adds: “These people have now become like a family to us.”