Solid waste management expert NS Ramakanth holds World Environment Day (June 5) close to his heart. The 82-year-old completes 20 years of advising people on how to handle waste. “From advising segregation at source to pushing the civic authority, the government and bureaucrats towards finding a better managed garbage disposal system, I have tried my best,” says Ramakanth.

He feels the last two decades of waste disposal in Bengaluru has been an evolving, experimental process. “Wet waste has to be segregated onsite as composting not only reduces the load going to landfill, but aids in forming microbes that help biodiversity when used for plants. It also adds a rich source of nutrients to the soil,” says Ramakanth, the senior-most member of Solid Waste Management Round Table (SWMRT) in Bengaluru.

Ramakanth holds a BSc in Mining Engineering from the Banaras Hindu University (1963) and worked in Italian and German companies before taking voluntary retirement in 1989 to plunge into community and social work.

When Ramakanth realised temples generated a lot of wet waste, he advocated composting. “It could be flowers, mango and plantain leaves, tulsi garlands or cups made of leaves (donne) used to distribute prasada. Vasuki, an active member of SWMRT and soil mechanics expert helped Kalyan Nagar Mahaganapathi temple compost all their waste, which generated 1.5 tonnes of compost in one year. A doctor, who owns a farm in the outskirts, bought the entire lot. Nearly 60 temples in and around Bengaluru and Mysuru follow this method. The compost is sold for a nominal fee, which goes into running the temple.” 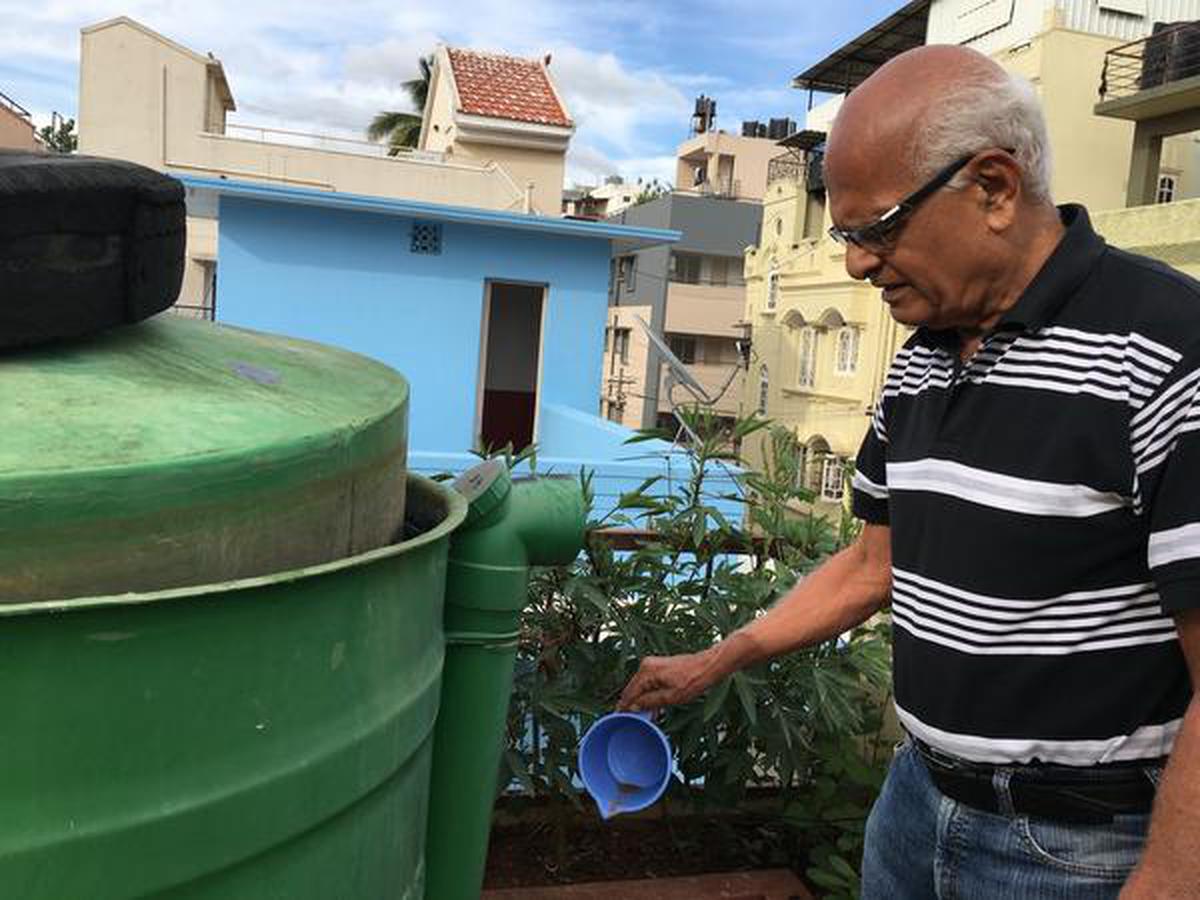 Ramakanth conducts basic garbage segregation and compost awareness workshops giving details of the different kinds of dry waste that can be sent for recycling. “Composting and recycling helps as only 10 % garbage reaches the landfill. With Bengaluru currently producing 5,757 tonnes of garbage per day, organic waste-handling should be part of everyone’s duty.”

The Republic Day flower show at Lalbagh this year also benefitted from Ramakanth’s advice. The 240-acre Lalbagh Botanical Gardens has more than 17,000 climbers, creepers, shrubs and trees apart from potted plants. “Can you imagine the volume of dry leaves and flowers? During the flower show, it is much more. We installed nine composters for the dry leaves and flowers, and within three months there are tonnes of compost, which is used in Lalbagh itself. Cubbon Park too has installed these composters and both the green spaces are now zero-garbage generating zones. I wish every park in Karnataka follows these composting practices.”

Sankey Tank did not escape Ramakanth’s eagle eye and he relentlessly crusaded for it to be cleaned. While cleaning the tank after Ganesha festival, it was found that 1,28,620 idols were immersed over 11 days. “We realised that new laws for immersion have to be formed. Immersion with flowers was not allowed from 2016 onwards and PoP idols were also banned. We should celebrate festivals sensibly. I want to persuade people to immerse idols after pooja in their own neighbourhoods. My dream is to see waste dealt in Bengaluru with more respect.”