The summer solstice is an important day in the calendar for lotus grower, hybridiser and hobbyist Ganesh Kumar Anandhakrishnan. He had been seeking the extended daylight to coax, cajole and bloom the rare ‘Ultimate 1000 petal lotus’, also known as the Zhinzun Qianban, on his terrace in Tripunithura, Kochi, in Kerala.

On June 21, amid the pandemic gloom, Ganesh’s spirits soared as he spotted a conical pink bud appear on the plant. Over the next 15 days, the bud slowly opened, “coaxed and tapped”, he says, and continued to unravel layer after layer until the whole, compact 14 centimetre flower was visible. “It has been super exciting,” says Ganesh, who relocated from Agartala in Tripura to his home town in Kochi eight months ago.

The origin of the 1,000 petal lotus dates back to ancient times but was rediscovered in 2009 by a Chinese horticulturalist, Diake Tian.

Ganesh’s love for lotuses goes back to his childhood when he was charmed by the garlands placed on the residing deity at the Sree Poornathrayeesa temple in Tripunithura. He picked up his interest in gardening from his father, and it grew manifold while he was posted in Agartala as a farm assistant with the Rubber Board.

“Our office garden in Agartala was huge but unkempt. So, we decided to make a winter garden,” says Ganesh. He introduced a native lotus, the pink and white variety from South India. “To my surprise, it bloomed frequently,” he adds.

This experience refined his interest in learning more about cultivation. The Northeast of India became his laboratory. Soon, his knowledge covered all the varieties from single petal to multiple petals, — “the white with pink tip Assam lotus looks like a larger version of the tulip,” he says — including the famed yellow lotus that adorns Goddess Meenakshi at the Madurai temple.

Networking with other lotus growers and members of the International Waterlily and Water Gardening Society (IWGS) helped build contacts. One of his friends, Somnath Pal, who is a waterlily hybridiser from Thane, helped procure seeds and tubers of different varieties of lotuses. 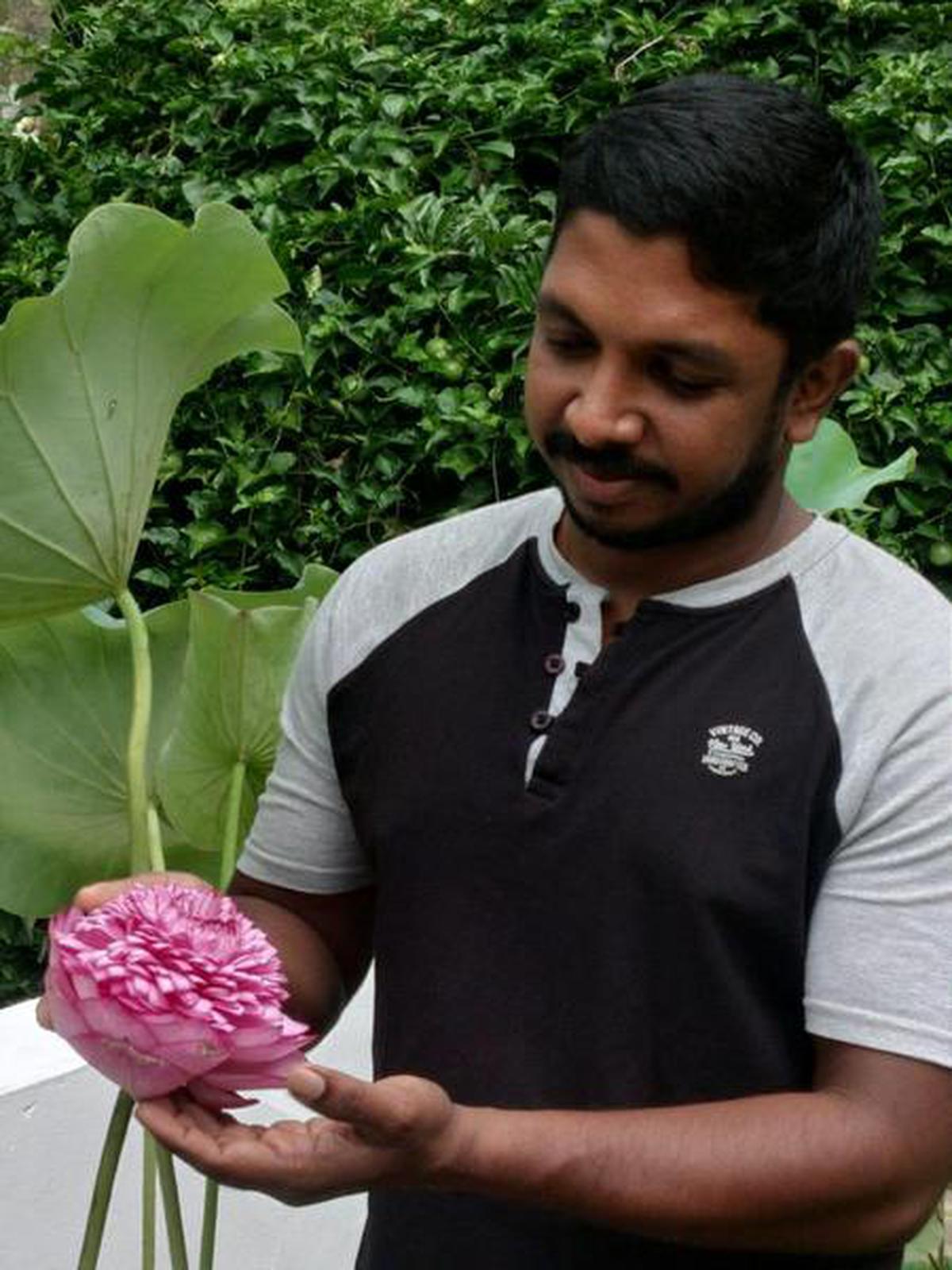 Ganesh thus created his first hybrid, a cross between a tropical and a sub-tropical lotus, Nelumbo ‘Alamelu’ (Nelumbo is the genus, followed by the name of the cultivar), which he named after his mother in 2015.

In 2017, his hybrid Nelumbo ‘Miracle’, a 500 petal flower, was the first lotus from India to get registered with IWGS . In 2018, he created Nelumbo ‘Little Rain’, a micro lotus. “The character of the flower is that it can be grown in a very small container too,” he says, explaining that he experimented with seed hybridisation.

In 2015, Ganesh procured the 1,000 petal lotus tuber from Tian himself, and, in 2017, managed to grow and make it flower in Tripura. However, growing the lotus in the tropical humidity of southern India, in Kochi, was a challenge. “There is a difference between sub tropical and tropical lotuses. The biggest problem to grow the temperate lotus here is daylight,” explains Ganesh.

So, when he planted the ‘ultimate 1000 petal lotus’ he was sceptical. “After the bud appeared, the rains came down. I had to protect the plant. A coconut frond fell on it from my neighbour’s garden dashing all hopes of the plant’s survival,” he adds. Yet, it bloomed and the flower became the cynosure of all eyes. It stood gracefully for five days before it withered, but another bud is unraveling under his watch. “We will offer it to the [Poornathrayeesa] temple,” says Ganesh.

He adds: “During my days in Agartala, when I felt lonely, the lotus was my only solace. It is a perfect analogy for the human condition because even when its roots are in the dirtiest waters, the lotus produces the most beautiful flower.”