It is said a picture is worth a thousand words. And every photographer clicking those snaps would have a thousand stories to narrate, especially wildlife photographers.

One of the unexpected gains of the lockdown has been the partial healing of the environment in many places. Thanks to photographers, images of the majestic Himalayas as seen from places more than 200 km away, dolphins frolicking in the clean waters of the Gangesand elephants ambling through empty roads in Munnar were seen and shared widely.

As the world observes World Environment Day 2020 on June 5, renowned Indian wildlife photographers select one of their favourite snaps of the wild and explain why it is close to their heart…

Many wildlife photographers, especially those from Kerala, associate wildlife and the open spaces with the colour green. It was my trip to Antarctica in January 2017 that completely changed such ideas and my sense of perspective and my idea of scale. Even in the grasslands, you can only see for a metres around. Here, sans pollution or humidity, it was possible to observe the landscape kilometres away. The predominant colours there are white, black and blue. 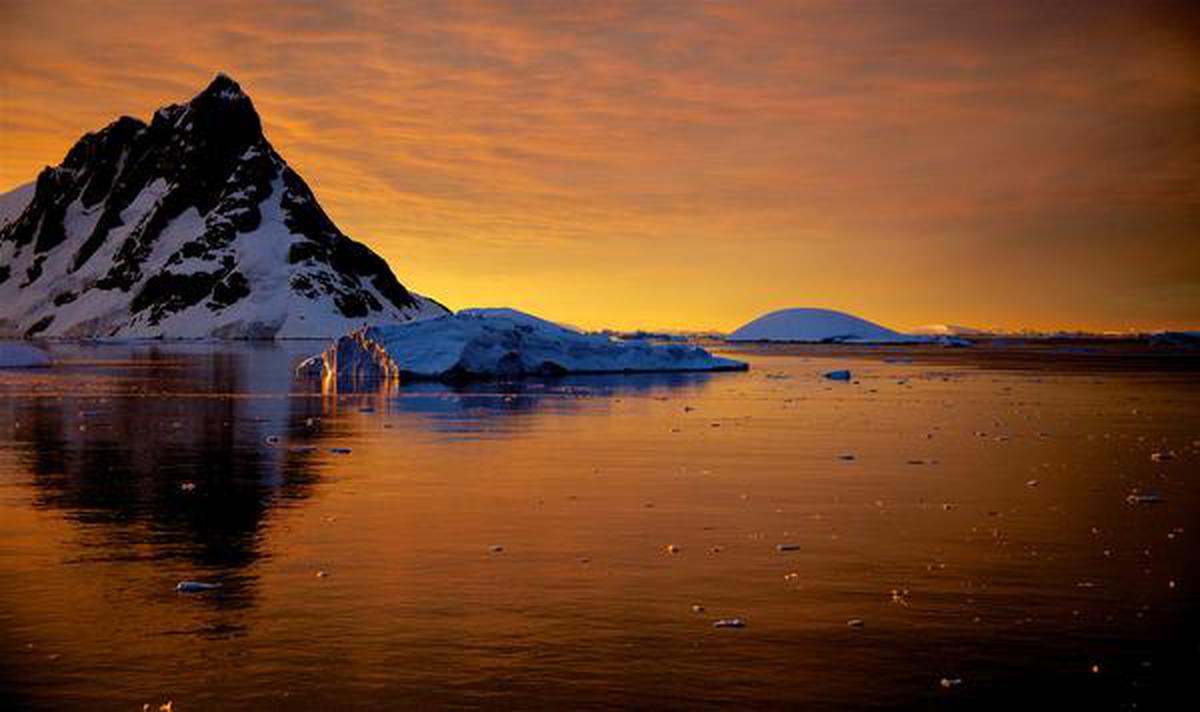 Black rocks jutting here and there in the white expanse of land was the only sign of any colour till I chanced upon a sunset and a sunrise somewhere near Wilhelmina Bay. Sunset was at around 11.30 pm and the sun was up within the next half an hour since we were at the pole. So one side of the land was bathed in shades of red, gold, mauve and ochre while the other side was still clothed in the shades of the night. It was a mesmerising sight of the grandeur of our planet, one I will never forget.

The elephant, one of the ‘sons of Sahya’, as pachyderms that live in the lower regions of the Western Ghats are called, had his fill early in the day one morning in 2016. As the sun rose high in the forests of Nelliyampathy hills, I waited patiently for him to make a move and he did, at his own pace. I followed quietly as he walked. As the temperature rose and it got warmer, he walked on. I knew where he was headed to. It was the dry season, which meant the stream wouldn’t have much water, not enough for him to get in for a splash. On reaching the stream, he dipped his trunk and gulped the water. With each gulp, water gushed out from the snout. I found that sight of water from the trunk filling his mouth magical. The jet of ‘waterfall’ was a relief and strength for the elephant to carry on. 
Although I had been following him regularly for almost a decade in and around this same forest, I had never been able to capture such a dramatic moment until then. Only when he moved did I realise how close I had been to him, and that realisation also brought along the satisfaction of this wonderful picture, which I would not have been able to capture had I been any closer or farther. This photograph was among the finalists for four international competitions, including Natural History Museum’s Wildlife Photographer of the Year award.

I have never come across parakeets attacking a monitor lizard. The whole action-packed incident is still fresh in my mind. The photographs won a lot of appreciation. 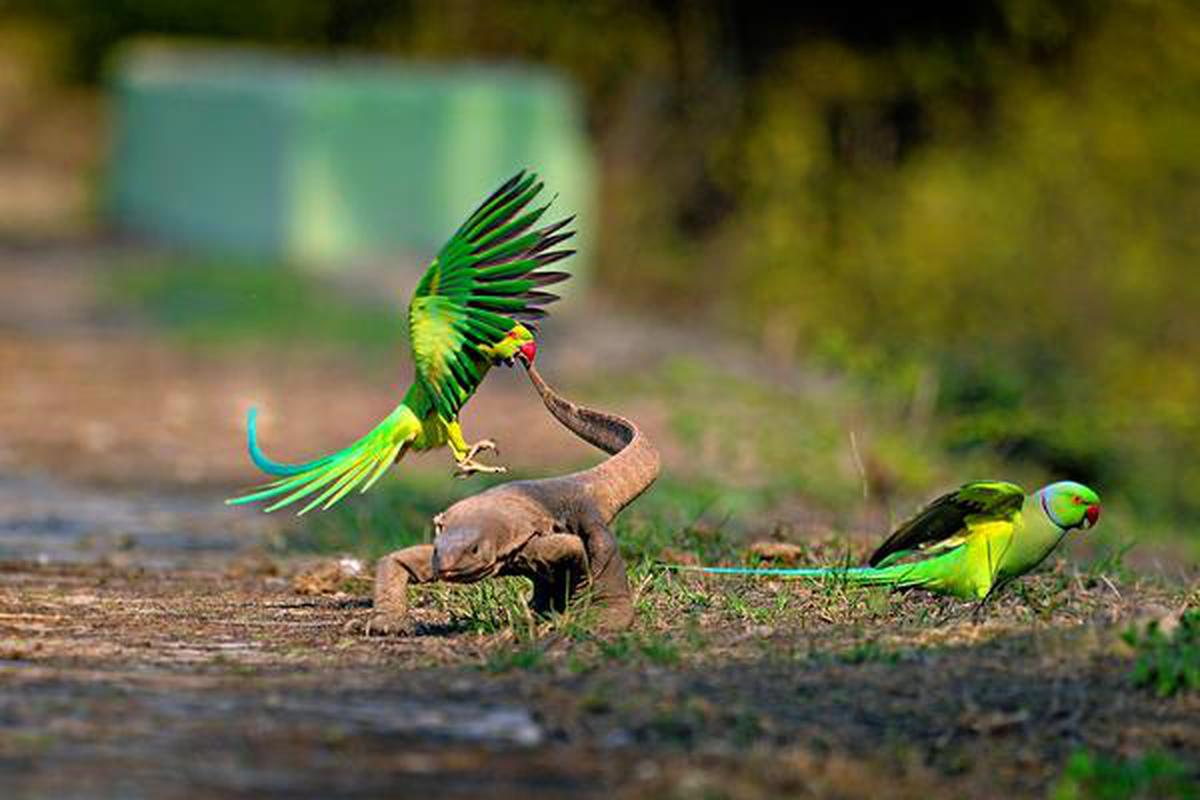 I was shooting migratory fowls in Keoladeo National Park, Bharatpur [in Rajasthan]. While I was kneeling on the ground to shoot them, all of a sudden, I saw something hurrying towards me. I turned my lens to see what it was. I was astonished to find a monitor lizard running for its life as a pair of parakeets was fiercely attacking it and trying to bite its tail. The parakeets were driving away the lizard that was perhaps trying to steal the birds’ eggs. After the lizard disappeared into the nearby bushes, the two birds kept a watch to ensure that it would not come back.

It made me realise that even these birds can be aggressive when the situation warrants it. Rose-ringed parakeets make their home in holes on tree and lay eggs in them. Both parents look after the eggs and protect them from predators. It reminded me of how protective animals and birds too are of their young ones.

When I am shooting a subject, I always observe my surroundings as well. You may unexpectedly come across other interesting wildlife. Sometimes, you get the most amazing shots when you least expect it. The cheetah on the horizon is Malaika with her cubs in the Masai Mara, Kenya.
| Photo Credit:
Nisha Purushottam

The cheetah on the horizon is Malaika with her cubs. One of the most famous cheetahs in the Masai Mara, Kenya, she was very famous for getting on top of safari vehicles. I had a few memorable, close encounters with her. On this particular expedition, we spent most of our time around these three amazing cheetahs. Eventually, they got used to our presence. When the sun was up, they would come very close to our vehicle to be in its shade.

I used a wide-angle lens and a monopod (held it upside down through the window) and controlled the camera through the phone. This image was a finalist in last year’s Wildlife Photographer of the Year competition conducted by the British Natural History Museum. The sad part is that, after this trip of ours, we got to know that Malaika vanished in an attempt to cross the Mara river. Perhaps, she was washed away by the river or eaten by crocodiles… or maybe she is living somewhere in the African wild. No one knows. However, in a way, I am happy. She was getting old and was struggling to hunt. I didn’t have to see her going through the pain of the circle of life.

(with inputs from Shilpa Nair Anand)